The extensive selection of Quality Hook, Loop and adhesive fastenings is driven by customers specifications
for innovative and cost effective solutions.
V TAPES are totally focused on meeting these requirements with prompt dispatch Nationwide.

How did it all begin?

De Mestral decided to turn the discovery into something useful. He perfected and patented a hook product and a loop product that mimicked the cocklebur/trouser combination.

Nowadays, his invention is called hook and loop fastener. The loop tape is soft and fuzzy, whilst the hook tape has stiff little hooks on it. Hence the brand name VELCRO® …. which derived from the French words “VELOUR” meaning velvet to depict the soft loop tape and “CROCHET” to depict the hook tape.

V Tapes are a family owned Company started in 1961 called The Design Centre.
We have been selling the Genuine VELCRO® brand since the late 1970’s when it was first introduced to the New Zealand market.

During the late 70’s and 80’s we became involved in exhibition and display manufacture. This led to the extensive use of hook and loop and related products.
In 1991 the VELCRO® Company ceased operating in New Zealand and V Tapes became an Authorised Distributor of the Genuine VELCRO® Brand hook & loop Fasteners.

Brief Time line of the Company ;

The photo on the right shows the Genuine VELCRO® hook & loop spot pack. It shows how the packaging has progressed over the years. The far right pack dates 1970’s The middle pack was from 1980’s to 2010. With the latest version and new logo showing on the pack far left. 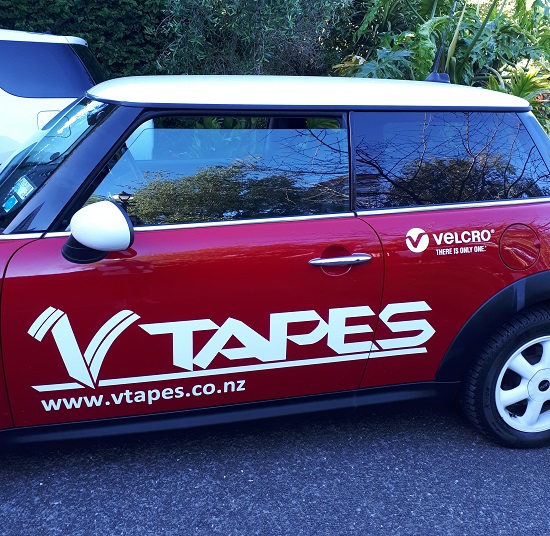 With over 40 years of supply into every business type and public service organisation, V Tapes Limited have built a reputation for quality products and customer satisfaction.

There is no minimum order, we have a wide range of colours, custom converting and die cutting facilities combine, to provide you, our valued customer with the best solution in all tape applications.

Why use VELCRO® brand hook & loop?

To ensure you get the best Hook and Loop fastener for your needs, our friendly and knowledgeable team are fully trained and ready to discuss your project needs.

Relationships Key to Your Success

The key to providing you with products that best fit your needs, flexible service from our family-owned and operated business is our continuing relationships with our customers, vendors and each other.